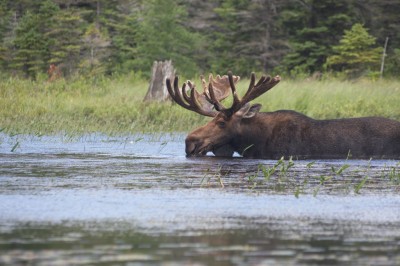 This was a good trip for my friend Keith’s first time into Algonquin, in terms of what to expect for canoeing, since the Tim River to Rosebary, and then on from Longbow to Sitting Man Lake (our final destination) is a good mix of winding rivers, grassy marsh, ponds, and nice, open lakes with deeper water — a good distance to cross all of it in one day.

Many thanks to Keith for the wonderful pictures of the trip.

The put in — Tim River

We put in to the water at early afternoon, which, although late, wouldn’t be a problem given the water levels, current, and the lack of wind (yay!) when crossing the larger lakes. 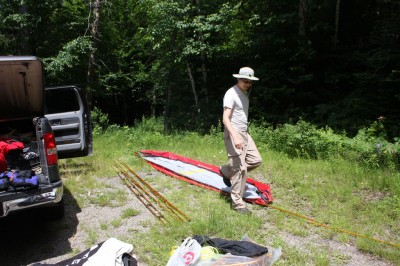 The Tim River was amazingly easy to navigate this time, due to higher water levels than usual, and despite getting used to a new person in the canoe (Keith’s not new to canoes, I just mean that we’d never been in a canoe together), it went fairly smoothly. I wasn’t used to as strong a paddler, I think, so I kept under-correcting and then overdoing my J-stroke, and in the Tim, that sort of thing got us hung up a few times.

We nodded a hello to a few couples and families, passed a pair fishing on Tim Lake, and then headed into the winding Tim River for a few hours to Rosebary.

Along the way, we encountered a few beaver dams, but the water was so high from the previous night’s rain that we were able to scoot right over them, since my canoe has a fairly shallow draft (doesn’t sink too deep in the water).This is a good thing about all canoes, actually, since they allow you to stay in the boat longer than most other water craft, getting you and your gear into remote areas with a lot less effort.

We stopped for a spot of lunch at Little Butt Lake (I’ve stopped for lunch here every time I’ve hit this lake, about half a dozen times, now).

We crossed Rosebary without incident, and spied a couple bathing… we assumed it to be two men at first, since they were both topless, but as we got closer, one went to shore, and returned with a bikini top.

Ah, nature. And no, we didn’t take any pictures.

A customary nod, and we let them keep their privacy by giving them a wide berth, and we were on our way.

Longbow Lake and Bog Pond for the home stretch

Longbow Lake is almost a very wide river, and very nice to paddle down. With the sun behind us and the long waters framed by the lowering sun almost directly behind us, it was quite picturesque. 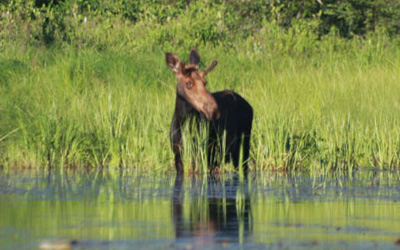 It was at Bog Pond that we saw our first bit of wildlife. I spotted a moose just off to the right, as we were setting off to paddle to our last portage of the day. Keith had never seen a moose before, and I was glad to be there at this first sighting. We stayed a while to enjoy the sight, and after a while, it moved on, and so did we.

The end of the first day

We had three portages in total, all of which were really easy (well, apart from the fact that they were portages), and those went without incident. There is a bit of a steep bit at the end of this last one, and I’d suggest two people just carrying the canoe right-side-up as they go down it. Climbing with a canoe, like most other things, is much easier with just the one person under the yoke.

We came out of the last portage, a 700m walk that was getting a bit too buggy for my liking, and gazed out at Sitting Man, a very nice lake.

A beaver greeted us just off shore, and then just swam off in a huff, slapping his tail noisily to show his disapproval before diving below, and staying out of sight.

There were two sites here, and we checked out the south one. It seemed small, cramped, and a bit overgrown, although it was nice and high. We settled on the North shore, on a peninsula-style point that faced south, and had a little bit of a bay beside it.

We pitched the tent, got a fire going with some soup and vegetables to add to it, and sat back and relaxed.

Nothing to do — just enjoy being here

The rest of the trip was nice and relaxing, and we found another moose, a cow, this time, at the south marshes of our lake. The loons were out and I think we agreed that there’s no better sound in summer than a loon call over a calm lake at dusk. At night, the frogs were singing to their congregation in full force, and something that sounded like a woodpecker tapping away drifted through the woods.

I have to make a note here about the steak that we brought. I’m going to track down the name of the butcher and pick up some more of his work next time I go. I’ve made Fillet Mignon in a pan while camping, on a grill, various steaks and sausages, but this was good prime rib that we cooked in the coals, along with two potatoes that just came out perfect. The meat was juicy without being too well-done, and the seasoning was just reserved enough to bring out the natural flavour.

The other meals were standards, KD (my at-least-once-a-trip comfort food) and Singapore Curry Noodles Sidekicks, bolstered by smoked cheese-filled sausages and turkey pepperettes.

Another first for Keith, he caught his first brook trout, ever. He’s quite an avid angler, so it wasn’t from lack of skill up to now, he just prefers bass, and had never fished these areas before. We had a good time fishing, and caught quite a few smaller fish (none for dinner – we got a nice perch on the way back that could have made it to the pan, but we gave it back). Others must have been eating well, with the amount of loons, herons, and hawks we saw.

I regret not bringing a camera. I really need to get one that is either so cheap and fast to use that I don’t care if it gets trashed, or one that’s really good and can take a decent amount of dunking and abuse.

I didn’t get any major breaks or bumps or injuries, except for a curious infection on my left hand’s ring-finger knuckle. I swell up from mosquito and blackfly bites quite a bit, and that’s how it seemed to start, but the swelling started to increase, and I eventually had trouble even bending my finger. It started to get an angry, red look to it on the second day, spreading out along the knuckle, and then darker red lines in the creases of my skin, so I took Keith’s advice, his lighter, and a safety pin, and jabbed a few holes in what seemed to be the worse area of my finger.

Oh, that reminds me, I have to replace antiseptic swabs and bandages in my first-aid kit. You’d think they would have more of those things. 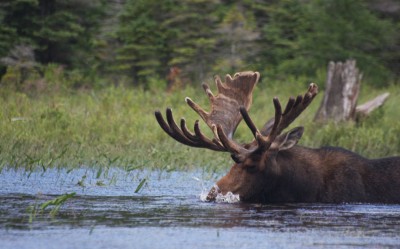 On the way back, we saw this great bull moose. It was early in the season, so we could get fairly close, but I’m always in awe of the power they’ve got. People always ask me about the bears, but for me, the moose is the animal to respect in an encounter.

“Although in summer moose are usually placid, care should always be taken in approaching the animals, particularly bulls. Bulls are extremely dangerous and unpredictable during the fall mating season, and moose should not be approached during this time.”

The way back was the usual into-the-wind paddling that always seems to be gusting and blustering when you’re tired and going in the other direction — I never seem to get tailwinds this strong.

A good bit of a trek, all in all, and I had a lot of fun. It seemed Keith had a good time as well, and hopefully, he’s got an idea of what to expect for his next trip out with his wife. 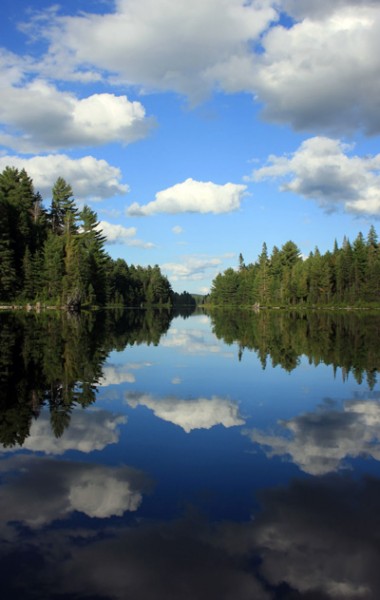 « Moose rock
For the future catch of the day »
Follow @awordinthewoods