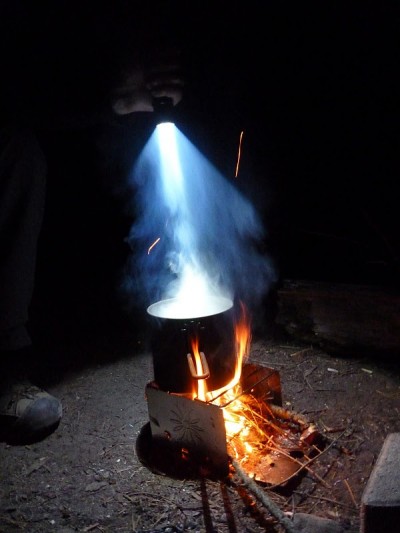 Gear: Fit is everything. Good gear selection comes from knowing what you want out of it, and a large part of finding that out is by knowing what it’s like to deal with an inferior product, or having to improvise to fill an unanticipated need along the way.

I wrestled with myself for quite a bit before deciding how to approach this article. I’ve wanted to write a “getting started” guide for a while, but this post has – like the gear list it touches on – evolved into a direction all its own.

Over the years, I’ve collected and invested in a fair amount of gear, some of it quite expensive, some of it ridiculously cheap, and some not at all used for its intended purpose. With all the gear on offer by outfitters, it can be overwhelming for new and experienced outdoors enthusiasts alike, both from a choice and cost perspective.

So how does one maintain balance? How do you decide what to buy, beg, borrow or build. And then, what to bring?

Sorry, I don’t have those answers, yet. I can offer some of my insights so far, however.

On a recent trip to Killarney, at the last minute I decided to leave the stove at home and instead bring a small folding Sterno stove — essentially a fold-flat, aluminum box meant to hold a can of liquid or gel fuel, and a grill on top on which you place your pot or pan.

I loved it. The week’s menus included meals like pancakes (which invariably burn over my white-gas jet stove); when used with the fuel can, simmering and slow-cook temperatures were easy to attain and maintain, never getting too hot.

On the other hand, boiling water was painful with the gel fuel canisters, what with wind and efficiency lost through the corners, and a low-heat-output to begin with, so a bit of improvisation led me to use the box as a wood stove. To that end, it performed admirably, using no more than the twigs normally discarded as too small by other campers. It allowed me to build an efficient, contained cooking fire with very little trace or waste. 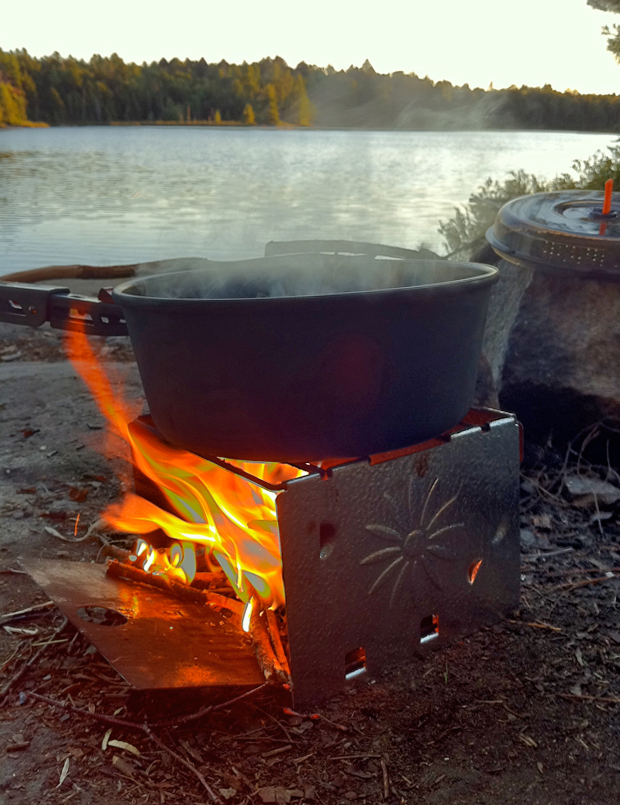 Was it as clean and efficient as my $200 white gas camping stove? — no.

But it was far less bulky, far less complicated, much simpler to maintain, quicker to set up and put away, used a sustainable fuel source, and cost me a whopping $3.50 on sale.

Nor are these the only choices; for years, I took a grill and cooked everything over the fire — if it rained, I worked harder to get dry wood, or ate cold food.

Potable water? I now have a pump filter, but unless I’m needing water on the go, I usually just carry chlorine or tablets — a lot cheaper for limited use, and easier to do bulk water purifications.

I used to leave the axe at home, it was a bulky, car-camping-mentality hunk of metal, but now, you won’t find me without my Gransförs mini hatchet. 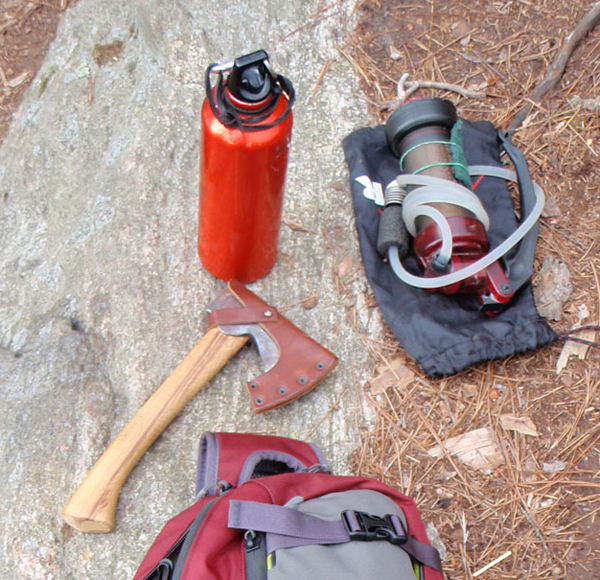 Looking at my gear purchases and uses over the years, a trend has started to emerge.

When I was young and money did not get earmarked for camping, my gear consisted of hand-me-downs and surplus, and I often filled my needs with improvised solutions, or innovative uses of household/easily obtainable products. The gear was often rugged, but very heavy, and not exactly suited to the needed task.

As my interest grew, I started to save for and spend money on filling those ‘gear holes’ — waterproof sacks, specialized gear, fancy stoves… but some of the frugal me still was reticent to spend too much on any one thing, so I ended up with a lot of gear, none of which were exceptional in the roles they needed to fill.

As my experience grows, I now see the value in spending my money on higher-quality items, while trying to ignore the items that are easily improvised or created, or even negated due to experience.

Based on lessons learned over those formative spending years, I believe that the best gear closet (actually just a bunch of tupperware boxes in a storage room) comes down to a fairly small “excellent, purpose-built products” list, and the rest is filled with a miscellaneous pile of inexpensive gear bolstered by imagination and experience, and a few basic raw materials.

So here’s a list. This isn’t a gear review, just a list of some of the bigger-ticket purchases that I don’t consider a “learning experience.”

These are purchases that immediately start showing their worth. They are all products I’ve owned for at least a few years now, and in which I haven’t regretted the investment.

Let me be clear, however: this is not a shopping list. This is an arbitrary sampling from my gear closet. It took me years to assemble — and the choices reflect the nature of my camping habits and comfort level. Your list may include the same equipment, but for different reasons. It may include none of them, and will be no less the perfect list. You need to find your own way, and the only way to do that is to play outdoors.

My go-to two-man tent is the MSR Hubba Hubba.

It doesn’t go on anything other than summer/fall backcountry trips. The cheap Canadian Tire tent gets used at camping weekends that are more like cottaging, and when there’s snow and ice on the ground, I have an old Kelty that is a rugged workhorse that I don’t mind lugging around. 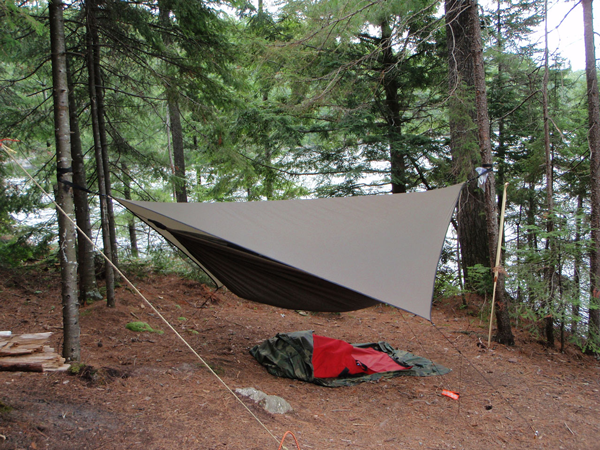 A wonderful alternative to the tent, my hammock is the Hennesy Ultralite Backpacker Asym. This provides the best, most comfortable night’s sleep you will ever experience in the woods. It leaves you feeling a lot closer to the environment, especially with the fly off. Like the Hubba Hubba, It’s mostly mesh, so you can see the canopy of stars or trees above you as you drift off to sleep or wake in the morning.

I also have a good quality tarp from Cooke Custom Sewing. It has taken the place of my main shelter the occasional time in non-bug seasons, but mostly it’s good extra prep shelter, and peace of mind, since it can always serve as an emergency shelter (to be honest, I still waver between that and the smaller, heavier, but oh-so-rugged military poncho that can do everything except fix your dinner for you and bring you your slippers).

These three shelters were some of the things I waited the longest to buy, but ended up making good decisions when I did. Until then, I had very cheap, very heavy reminders of what the opposite of good quality felt like.

I have a sleeping bag that is a bit of a compromise, and will probably be the next bit of kit that will get replaced, but it’s likely to be an expensive choice, so I’m not in any rush. I have a few light-duty bags for laying, much like the approach for clothing, and one nice warm down/synthetic mummy bag. My hybrid sleeping bag serves me well, but is bulky and heavy, so the upgrade will either be an all-down -12C mummy bag, or, if I can find something I like, a quilt or “top bag” that is easily anchored to my Thermarest. The Thermarest is a must for a warm and comfortable night’s sleep. I have an early prototype of the “Women’s” version of their pro line, which, other than a pink that doesn’t appeal to either sex, is well-designed with rounded corners, and a shape that makes it ideal for the hammock. It’s about a foot shorter than me, which means that feet or head have to rest on a bag or get chilled by morning.

I don’t believe they make the one I have any more. Mine has a lot more metal on the pump, and the new ones have a broader simmer control, but it’s essentially the same design, and same amazing range of fuel compatibilities.

I know I compared it above to the $3 Sterno box, but I’ve been in the middle of the woods in the Canadian winter setting up an emergency shelter in the middle of the night with two colleagues suffering from hypothermia in need of hot drinks NOW, and this stove delivered when others broke down. I may not bring it on every fair weather trip, but I don’t regret the purchase.

GSI cookware: The Teflon on this is so good it feels like I just have to shake the pot and it’s clean, and it’s specially made to be used with metal utensils. There are a lot of little things that tell me they’ve actually left the lab and cooked/eaten with this set at one point, such as multiple-unit gradations on every cup, insulated sleeves, and a strainer in the lid. My only wish is that they included attachment points for a bail, so I could hang it over the fire.

When I go a bit simpler, I turn to a GSI double-boiler. The tall shape makes it ideal for boiling water, and in a pinch, it’s just fine to prepare macaroni and cheese, or to cook up a small soup. Most of the time, it’s just a water-boiler for oatmeal or MREs. 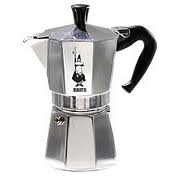 Believe it or not, a good set of sturdy barbeque tongs make it into my pack most trips, and can be invaluable for arranging coals on the fire for cooking or warmth. Get the ones that look like salad tongs, but use a lot thicker metal. The ones I have are strong enough to pick up 4″ diameter fire logs without bending.

I’m not normally a coffee drinker, but when I go into the backcountry, there’s almost no better brew for greeting a rising sun than an espresso, so more often than not, I bring a little Bialetti coffee-maker.

Look for a food post in the near future — it’s by far the part of planning a trip that still gives me the most grief.

Good quality tools are a book’s worth of content, so stay tuned for subsequent parts of this article, in which I’ll talk about some of the camp essentials and nice-to-haves. I’m just going to mention some notables: The wonderful Gransförs mini hatchet, developed and forged by Lennart Petterson; a decent, fixed-blade knife, such as the Grohmann D.H. Russells from Nova Scotia. You can’t go far wrong with light, strong, versatile rope such as mil-spec paracord 550.

If I knew then what I know now…

If I had my druthers, I’d of course elect not to have wasted all that money on the mediocre bulk in the middle. But nothing could have really replaced the experience that I needed between then and now. If I could go back and give my past self the gear I have now, it would no more be appropriate than if I just bought the most expensive shoes in a store.

I’ll say it again: Fit is everything. Good gear selection comes from knowing what you want out of it, and a large part of finding that out is by knowing what it’s like to deal with an inferior product, or having to improvise to fill an unanticipated need along the way.

As with so many other things, enjoying your time outdoors is a balance of tech and technique. Use your experience to add to your toolbox of camping equipment AND outdoor skills, and when you spend, you’ll spend wisely.