It looks as though Marathon on King street is closing down. They have an “End of lease” sign up, and are offering savings to sell off their inventory. In the past few weeks, it’s gone from (up to) 40% off to 70% off as of today. I plan to stop by today or tomorrow, so I can take a look at what’s available.

Marathon has always been overshadowed by the larger stores around them. Directly across the road from them is the very modern, very organized Mountain Equipment Co-op, and just a few doors down the block is the second location of Europe Bound, not quite as organized, but a definite contender in the one-stop camping supplies chains.

The store is dwarfed by these two giants, but has managed to carve a bit of a niche for itself. Budgets and requirements for camping supplies vary from person to person, so more choice and competition is always a good thing. While both Europe Bound and MEC have a definite back-country/hiking/travel focus (the latter adding cyclists and urban style to their repertoire), Marathon has always seemed to cater a bit more to the quick overnighters, or car-camping. Some of their stuff is a bit generic, but their selection of clothes usually provides a good alternative to the big neighboring stores. I may be doing it a bit of a disservice by lumping in with car-camping stores — I don’t mean to make it sound like it’s the same as the camping section of the Canadian Tire. It’s better… but it’s close. 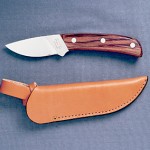 There is one exception where Marathon really shines, however. The selection of knives has filled in some glaring gaps to be found in other stores in Toronto. I’m a big fan of the D. H. Russell knives by Grohmann, and they seem to be the only store around here that sells them. Not only that, they actually have a good selection of the entire line. I’ve got my eye on the mini skinner, a small, practical camp knife with a fixed blade and full tang, and I may pick it up if they offer more than 10% off (that little “up to…” fine print at work). It’s designed for skinning, but it’s a good utility knife. I’ll write more about knives in a later post — they’re far too important a camping tool not to devote a decent chunk of time to.

Marathon has been around for about 10 years, and has survived decently well in that time. There were many times I wondered how they stayed afloat, as they always seemed empty — unfortunate to see that they are finally closing.

I wasn’t able to find their official website, and I have no idea how long they’ll be here – my guess would be just until the end of this month, if their sale is an end-of-lease one. I’ll post more as I find out.

Other than through my patronage, I am not affiliated with any of the companies mentioned above.